» In the Christmas Ship Parade!

In the Christmas Ship Parade!

Over the Thanksgiving Break, we had my father-in-law and his girlfriend staying with us (for eight nights, which deserves it’s own post, but I’ll spare you those details).  They live in New Mexico and were really excited about going out on the water. As you may recall, the Saturday after Thanksgiving was a calm and sunny day–perfect for slow cruising around Lake Union and Lake Washington. We left the dock around 2:30pm and putted all the way from Fisherman’s Terminal, through Lake Union, into Portage Bay, through the cut and ended up over in Kirkland. We tied up at Carillon Point marina’s guest side-tie moorage to walk the dog and get the kids some hot cocoa at Starbucks.

Leaving Kirkland, we cruised back towards Lake Union and docked up at Ivar’s to grab some grub from the Salmon bar. It had been a long time since I’d had their salmon-n-chips…still delicious!  Everyone was having such a great time we decided to stay on the boat a little longer so we could join the Christmas Ship Parade at the south end of Lake Union.  My cousin was going to be in the parade on his sailboat so we touched base with him and met up on the water.

By now, it was dark out but the almost-full moon gave us that extra bit of moonlight and made nighttime navigation a little easier. I don’t think there was any wind at all that evening. It was the calmest night on the water that I can remember. It was a little cold, but that is part of the fun. My wife and her dad went out on the bow to get a better (but colder) view. 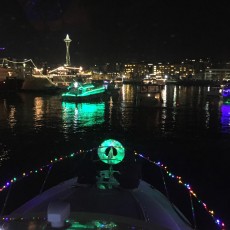 My wife and her dad getting a better view

The kids finally took a break from screens and came out of the cabin to see all the lights. We met up with my cousin and pulled up along side each other so we could exchange hellos.  He had a few friends on board along with a variety of heat sources to stay warm in Briza’s cockpit (I suspected mostly rum!)  It was great to see so many decorated boats out there. 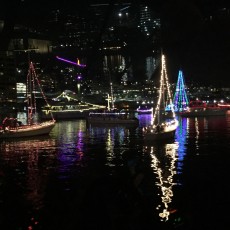 Lots of decorated boats out there with us

The Argosy boats had a great choir and we listened to the music. My father-in-law’s girlfriend was singing along–so I know she was having a great time. 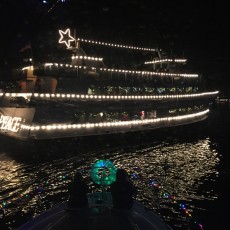 Wishing you joy and peace

If you haven’t decorated your boat and been a part of one of the parades, be sure to put it on your bucket list! It makes all the work of decorating the boat totally worth it (you did do that this year, right?)