We all know that the goal is to keep the water on the outside. I’ve noticed water in my bilge for a while now but I haven’t been able to figure out where it’s coming from. Before the last trip, I wasn’t even sure if it was rain water or lake water (I’m moored in fresh water). I’ve made checks in the lazarette and engine room while we’re underway and haven’t been able to find any water coming in.  However, we tend to do our cruising at 9 knots a lot of the time lately and I’ve only been snooping around down below at slower speeds–that was about to change.

On our most recent trip to Gig Harbor, we were slow cruising over to Blake Island on Friday evening to spend our first night. It was really peaceful out so we were slow cruising at 8 knots. About 5 miles out, the wind picks up and we’re taking waves on the port beam so I decide to speed up. I push the throttles forward and soon we’re at 20 knots. Something about the way the boat felt made me decide that it was a good time to take a look in the lazarette and engine room. I asked my wife to take the helm and let her know what I was going to do. I opened the lazarette and saw water in the aft bilge–more than I’m used to seeing. I grabbed a flash light and stepped down and tried to see where water could be coming in from. I couldn’t find anything obvious so I decide to check out the engine room.

Being in the engine room at 20 knots is a lot different than being in there at 9 knots. First of all, it’s much louder. Be sure to wear ear protection before entering the engine room when the motors are making peak power. Also, take a look at your person and make sure you’re not wearing any loose clothing or long hair (not an issue in my case!) that could get caught in machinery. Also, be sure to let the person at the helm know that you will be in the engine room.

I stepped into the engine room and decided I should peak at my shaft seals since that seemed a likely culprit.  Both of my shaft seals are covered by large pieces of wood that make up the walk-way into and around the engine room–so I’ve never been able to get a really good look at the seals while underway.  I grabbed my flash light and did my best to peak under the wood covers. This time, it was easy to see that a lot of water was spitting out of the port seal.  Yikes!

I went back up to the bridge and slowed down and then went back down to check the seals. No leaking (or, not enough to see at least) at slower speeds. Hooray! We’re not going to sink today! We slow cruised into Blake and got tied up.  I then removed the wooden walk-ways over the seals so I could get a good look at what was going on–something I had never done before. The starboard side did not really seem to have much of an issue but the leaking on the port side had clearly been going on for a while because one of the four hose clamps (two on each end of the seal boot) had corroded and broken off. Luckily, I carry spare hose clamps and was able to replace them all. I also burped the seal which seamed to clear out a bunch of debris.

I planned to keep the boards removed so I could keep on eye on the seals until they get repaired or replaced. This meant I needed to do something to prevent a bunch of salt water from spraying all over my engine room (since normally the boards fully cover the seals). Luckily, we had a one gallon clear plastic bottle of drinking water that was almost empty. I cut it and half and was able to use long zip ties to place one of the halves over each seal. This worked out perfectly because I could clearly see the seal and check how much water was leaking at various speeds. 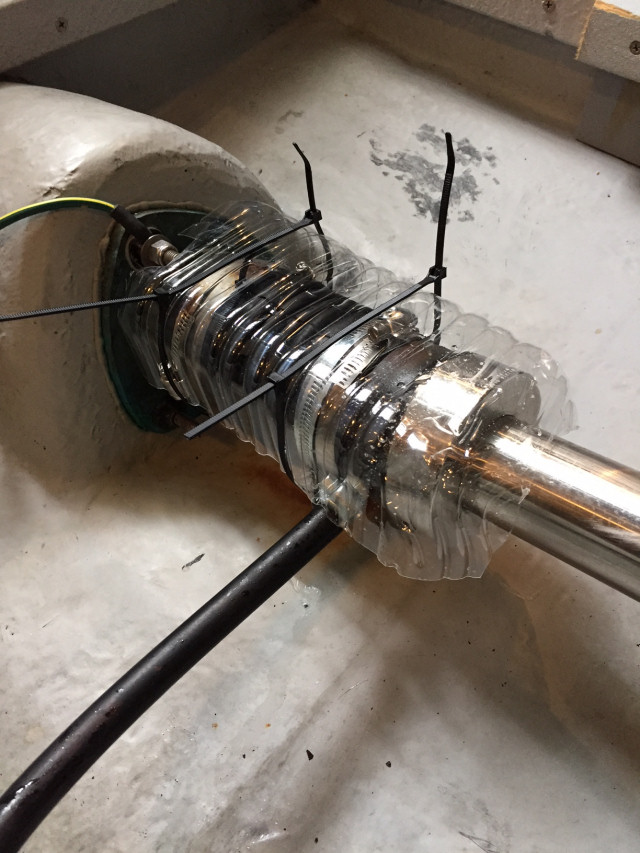 We did a sea trial around Blake Island in the morning and found that the seal was sealing much better at high speeds–now there was only a thin strip of water at 20 knots instead of a major flood. Unfortunately, I also noticed that my port shaft did not seem perfectly true when spinning at high speeds. Because of the state of the port shaft and seal we decided to continue on to Gig Harbor but at 9 knots the whole way there and back.  Luckily, the seas were calm and the currents were with us so it turned out to be a beautiful cruise. Plus, I learned a lot about shaft seals in the process!

After I got home and did more research, I learned that my seals should be replaced every 5-7 years and mine are now 10 years old. Doh! So, I have a couple of new projects to tackle. A boating friend is highly recommending Rick Lee from Relius Service and Repair for this type of work. I talked to Rick last week and he seems knowledgeable and we’re coordinating when he can come down and take a look–most likely starting with an engine alignment since my props we’re just balanced in November and my cutlass bearing was replaced in 2012. I’ll be sure to leave a review on Seattle Boatnuts of course!  🙂

Thanks for reading and happy boating!

p.s. You can find all boatnut blogs by clicking here.